I fulfilled a dream today to fry an egg with only fire and a shovel.

Ever since I was a child and saw the fire stoker of a steam engine. They fried an egg on a shovel.

I cannot remember where I was at the time, I must have been quite young maybe six or seven. A large steam engine shunted it’s way up the platform, smoke enveloping us all filling our nostrils with smoke leaving a bitter taste in our mouths. I remember thinking It might not stop, afraid that I might miss the train, My brothers told me when heading for the platform that we had missed the train, so seeing it go past filled me with dread ( I was very young). I think they did this just to wind me up. The train did stop, we climbed aboard, we sat in a compartment with six seats not the rows of two you get now.

I imagine you would have had great conversations and could have met people of many varieties over long distances. Or it could have been equally as bad if you got a seat next to a boring person or some nasty old man. (sorry I didn’t mean to stereotype here)

There was a sliding door which led to a corridor, me and my brothers would run up and down from one end of the carriage to the other. My mother would come out and find us standing leaning out the windows waiting for another train to come the other way. My brothers also told me if a train came the other way it would chop off my head. (I still don’t put my head out of train windows)

It really was Great fun.

I apologise for my digression, back to the egg and the shovel, tonight I fried the egg on a shovel, below is the proof.

(Kids don’t try this at home, like I did)

Ok I admit it’s a garden burner not a steam engine. But the concept is the same, well I think it is. 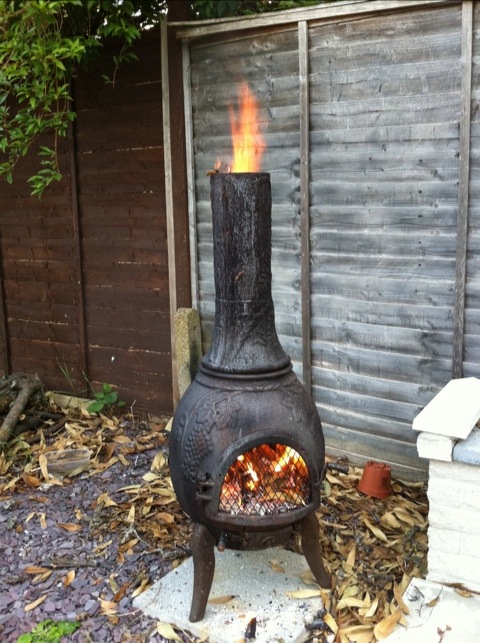 Fire is a very intoxicating thing it always makes me want to feed it more.