Last week me and my family camped at a campsite in Tarland, Scotland, about thirty miles inland from Aberdeen. Our Camping credentials are not to bad just a bit out of date. You see back before me and my wife got wed and had the children we were quite the campers. Starting in a old frame tent soon moving to a conway trailer tent, finely finishing for a while in a caravan. This is where i think we went wrong. You see we were in our early twenties and full of life wanting to explore the uk costs. But in a caravan at twenty three, no I think we were to young for that kind of comfort. We should have stayed with the tent and by that i mean the first one not even the trailer tent. In essence we took out the romance of camping by moving to quick to a caravan.

Fifteen years on, a marriage, and two children, a tenting we shall go. My current tent is a Montana 6 with canopy. According to my research and recommendations it is pretty much the best family tent on the market. We could all agree that Scotland is not the best place for settled weather so a fifty fifty split on the rain and sun, I think is good, even in the summer. You don’t go to scotland for a tan, mostly its the scenery and there is scenery a plenty. That is apart from our camp site manager, what a mean man. He did not give us a true welcome and just to be clear i would not recommend the Tarland camping and caravan site to anyone while he is in charge. I won’t go on about this as it will spoil my post but a letter of complaint is of to them, that i promise. grrr snap grrr. On with my holiday. 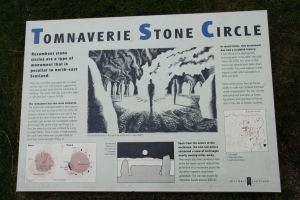 Just out side Tarland was a place called the Stone circle, it was built over four thousand years ago. Complete with a sacrificial alter where sacrifices were killed and burnt. It looks like a mini Stone Henge.

Local to us was a small town called Aboyne, nice butches there my brother BBQ a good bit of fillet from Aboyne.

Banchory was great, plenty of small shops to look round and a well stocked Morrisons, which is very important for us campers.  There is a small bridge crossing the river Dee where the salmon swim up stream each year and if you are here at the right time you can watch them fight to climb the small water fall called the falls of Feugh. We managed to get a few good pictures here or should i say my brother did he has the super dupa camera. 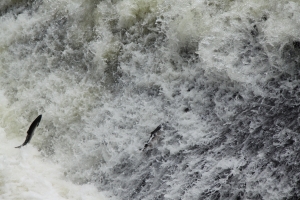 We have family in Aberdeen so a trip over there was essential. On the way we stopped of at a distillery next to Balmoral Castle home to the queen. The distillery is called Royal Lachnagar I mentioned it in my last post, that was when I just finished the bottle I had brought. It ranks as one of the best so far so if you have a chance, try a bottle, great stuff.

Unfortunately Balmoral was closed so no trip there, the whisky tour made up for it by far. What shocked me was how many ruined building were about it seemed that at times where ever you looked there was a ruin. On the way back from Lachnagar we came across an old church still in use today for the locals. It felt like an honor to be in the grounds full of history and great gravestones carved as logs of wood. No doubt the person buried there was a lumberjack.

The last place we went to see was in Stonehaven and by far the most inspiring ruin i have ever seen. Dunnottar Castle was out of a story book truly historic. You can see what went on there in your mind, my imagination went crazy. Being that i like to write about fictional things this filled me with more inspiration than anywhere has ever has done before. This is a must for any romantic, poet or writer. To sit in the grounds will release any writers block. My brother took hundreds of pictures, he said, he new it was to many but every corner he walked round he saw a new picture that needed to be took. 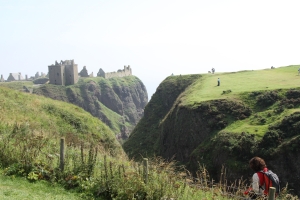 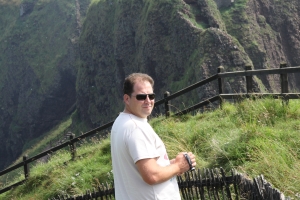 A great holiday was had by me and my family, in one week i managed to look at a fraction of what the east cost of scotland has to offer. Next year i plan to do the west cost hopefully travel on the the Jacobite (harry potter train) it travels from Fort William to Mallaig.

Aside from the site manager we had a great holiday. I would like to thank my brother Paul for the photos as he took them all.